Skip to content
Date: December 6, 2015Author: Colleen Sinsky
By Colleen Sinsky
Here are five stories from Lesvos that will never be on the news. I wrote them each to share on Facebook in order to document my month of volunteering here and to advocate for a more compassionate refugee resettlement program in the US by humanizing the victims I’ve met here. I’ve been surprised by the overwhelming response to each of these vignettes, so here are they are, collected for you. Thank you for reading!

“If you have come to help me, you are wasting your time. If you  have come because your liberation is bound up with mine, then let us work together.”
-Lilla Watson
————————————————
ONE.
One night in late November, the Greek Coast Guard got a call that a refugee boat was hours overdue because family members back in Turkey hadn’t heard from their loved ones on board. After searching the dark sea for hours, the Coast Guard found the raft and brought everyone on board to the nearest land- a tiny fishing village-where a café was turned into a makeshift Emergency Room. There, doctors and volunteers managed to save everyone, despite many suffering from hypothermia and shock, including a nine month old baby with Downs Syndrome. Throughout the rescue, the refugees were frantically telling the aid workers that there was someone else lost at sea- they had to continue searching.
…
When the engine of the raft had died halfway across the Aegean, and the overcrowded raft began to fill with water, the families on board panicked. The last of their possessions were tossed overboard, but they continued to drift and slowly sink on the dark sea. From the edge of the raft, a tall, broad-shouldered man from Iraq spoke up. His wife and children had been killed by the rockets that destroyed his home. He was alone in the world. To give the sinking raft more time, he would jump overboard, hoping that without his weight, the others on board would have a chance of rescue.
I don’t know how long he floated, or what that frigid, lonesome night in the Aegean was like. I imagine that he looked up at the stars and thought about his wife and children, and how he would soon meet them again. I imagine that they would be proud of him.
Meanwhile, the Spanish lifeguards had heard the story and quickly mobilized jet skis, heading off into the darkness to find him. Every once in a while the lifeguards would cut the engines, scan the choppy water with flashlights, and call his name. Eventually their light fell onto the man’s waterlogged orange life vest, and the lifeguards raced his unconscious body back to the café on shore. Doctors and volunteers had few resources, but spent two hours administering oxygen and trying to warm him up. The doctors said that he teetered on the brink of life and death and would not have survived another five minutes in the water. But he did survive. He eventually sat up to ask about the raft and to thank his rescuers in every language he knew. I don’t know his name or where he hopes to go, but I know that he texts his rescuers updates and gratitude daily. I hope he finds a place he can someday call home again.
It’s true that not all refugees are women and orphans. It’s true that they come from a culture that I know little about. And it’s true that it’s easier to think in broad generalizations and to let fear overshadow our responsibility towards other humans. But I would rather live in a country with that man who willingly sacrificed his life, than be part of one that would exclude him.
Thanks to Joakim B Olsen and Maria Kamal, fellow volunteers at A Drop In The Ocean, (http://drapenihavet.no/en/) who spent a long night saving lives and  told me their story.
Also to the lifeguards of Proactiva
http://en.proactivaopenarms.org/
And doctors of IsraAid http://www.israaid.co.il/

————————————————
TWO.
It was eerie to walk amid these towering piles of discarded life vests. I’m now used to seeing the vests along beaches, but in the central landfill- where all of the gathered vests are brought from around the island- I was struck by the sheer magnitude of this crisis, and by this physical evidence of the collective trauma endured along the journey. I couldn’t stop comparing this massive pile on Lesvos to the tens of thousands of shoes taken from the Jews murdered in the Holocaust because they were not able to flee the Nazi regime. I thought that the purpose of displaying those shoes in various Holocaust memorial museums around the world was to shame and remind the world of the terror our ignorance once caused. If it is only through hindsight that we let ourselves be horrified by atrocities of this scale, then we are doomed to repeat history again and again. 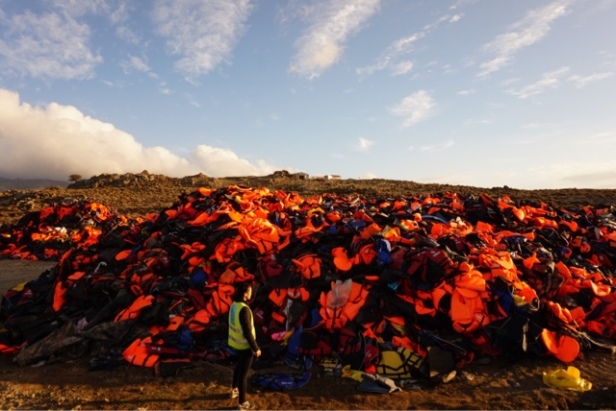 More than a piece of trash, each vest represents a life story. Of bombs destroying neighborhoods and random police raids, and children going to bed afraid. Of the agonizing decision to pack and leave the only home you’ve ever known because a war zone isn’t a home, and to become a placeless family at the mercy of an unmerciful world. Of forcing your children to keep walking through the night and to lie silently so that you won’t be discovered. Of beatings at the border and remembering the favorite food you’ll never have again. Of seeing that much open water for the very first time, and then the tiny raft that the smuggler you paid is now forcing you to get on. And you know that 60 people is too many for a boat this size, and you know that each life vest you paid €150 for is fake, and you know how many people have drowned ahead of you on this crossing, but you sit in the boat anyways and hold your beautiful, scared children close. You avoid eye contact with the others because seeing your fear and desperation reflected in them would be more than you could handle. So you stare straight ahead, while your brain prays for “Europe. Europe. Europe. Europe.” so that there’s not space to wonder if your wandering nightmare will ever end. Because when your home is a pile of rubble, and there is nowhere but forward, you tell yourself that this life vest means hope and not death. 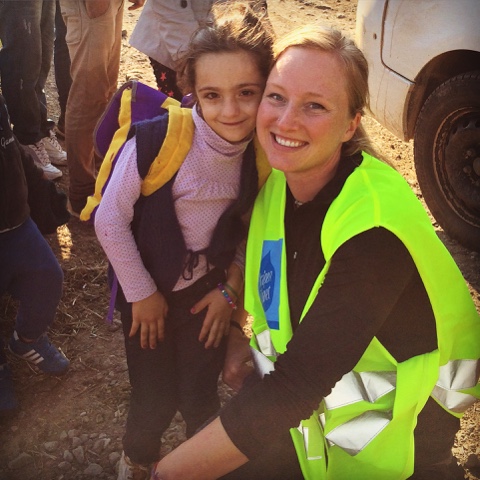 The engine of the small wooden boat that ‘Sara’ and her family were on gave up halfway across the Aegean Sea this morning. They were adrift towards a dangerous coastline until a local fisherman managed to tow them to a rocky beach where we, and a team of Greek lifeguards were waiting. We formed a human chain to dry land and passed the babies and kids to safety. Everyone was shaken but fine.
I cannot imagine the anguish of risking the ocean in an overcrowded boat with your children. I cannot imagine the horror that they are escaping.
Sara is blind in one eye from shrapnel from a rocket hitting their neighborhood in Syria, but you would never guess it from how well she looks after her younger sisters, how ready she is to play a game, and how quickly she figured out my iPhone camera.
Her family has one suitcase between them, and nothing left of their home. This is whose future will be made hopeless by closed borders. 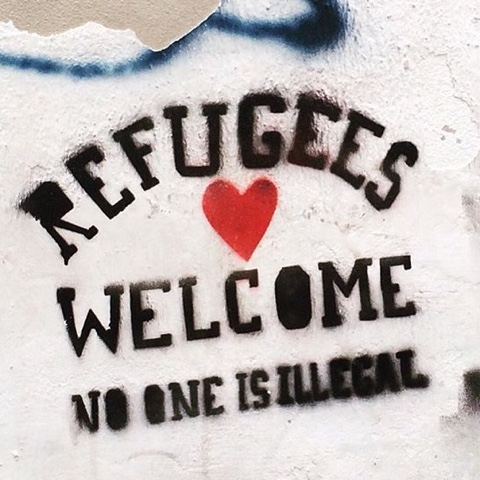 ————————————————
FOUR.
Today, during a quiet, chilly morning spent cleaning a Lesvos beach, I found a soggy pink backpack rocking in the waves. I dragged it up the shore and knelt down beside it to search for a passport I could try to reunite with its owner. I pulled out small pink Levis, a sweatshirt with a rainbow owl, frilly yellow socks, a purple hairbrush and messy collection of hair ties. No passport or anything identifiable, but a young girl’s entire life possessions carefully folded, carried, and then lost.
What was she thinking as she chose which clothes to pack? Was she optimistic, imagining herself as the American girls she’d seen on TV? Was she terrified, as bombs shattered the neighborhood outside?  Were her parents shouting from down the hall, “Hurry, it’s time to leave.”? Did she say a final tearful goodbye to her favorite stuffed animal who wouldn’t fit?
I don’t know the fate of the pink backpack’s owner. I found it beside a young Syrian boy’s passport, so they may have washed up together from a raft that sank in the night. It may have been tossed overboard when an overcrowded raft began to fill with water. I wish I knew where she is now—I think.
There is too much tragedy here for it to be newsworthy anymore, but these  stories deserve to be told.

————————————————
FIVE.
“Hamid” and I met walking past the glow of a campfire on ‘Afghan Hill’ in a squalid, overcrowded refugee camp in southern Lesvos last night. We were born just 22 days apart into wildly different worlds- USA and Afghanistan. He is a former elementary school English teacher and UN volunteer who just arrived on a raft from Turkey, seeking a safe place to call home.
Here is the essence of the insights that Hamid shared in the raw conversation that ensued.
“I’ve seen so many things that make me question if life should have happened. People who have lost their entire families and had to leave with nothing. Would it be better if life had never happened, rather than this misery? I used to think yes, but I am trying to be optimistic.
I know that the mass media lies everywhere, but for 27 years I saw them telling us that the US and Europe don’t care about us, the poor people. But I realize, here on Lesvos, that that’s not true at all. Can you believe that last night at 3am I saw two female volunteers like you actually walking around to ask if people were okay? Really! They actually came here from their countries, just for us, and were awake all night just to see that refugees here were warm enough. I still can’t believe it. I thought that no one cared, that no one got along, but here it’s different. Yeah, this camp isn’t very nice, and it’s very cold, but I’ve never experienced multiculturalism and volunteers like this. For the first time, I am really optimistic. Maybe our governments do not get along, but here we do get along. This place makes me happy. It makes me optimistic for my future and for the world, because it’s happening here.
I can see so much beauty in the world, and it’s important, because without that, and without optimism, that’s not life anymore. I was talking to a volunteer doctor here yesterday, and she was also very sensitive and emotional like you, and we decided the truth. That it’s good to be a sensitive person, and to feel others’ pain, because if you don’t, then you are missing out on a key part of being human. You’re not really living how humans are supposed to live. You’re supposed to care for each other no matter how different they are. And that is what’s happening here.”

Thank you Hamid, I needed that lesson in optimism as a send off from this beautiful, heartbreaking island.
And thank you volunteers and other allies for being a beacon of compassion in an otherwise dark time.
———————————————— 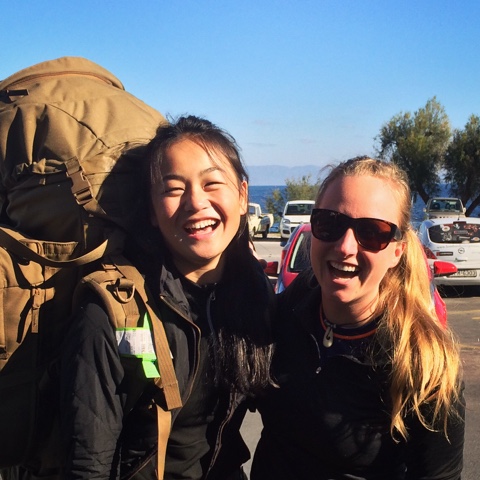 2 thoughts on “Five Stories from Lesvos”