Istanbul wasn’t on our original trip itinerary, which only included flying into Athens, Greece, and out of Casa Blanca, Morocco a month and a half later. I booked our big transatlantic flights using miles as our Alaska season was winding down last month, and we planned to fill in the blanks in overland travel as we went along. I don’t know if it makes me an awful travel blogger or a good traveler that I just spent a month getting from Alaska to Turkey without thinking to blog until now. Whoops. I’ll go back someday and write about Athens, Crete, and Santorini, but now I’m fast-forwarding to Istanbul (not Constantinople. Get it?). 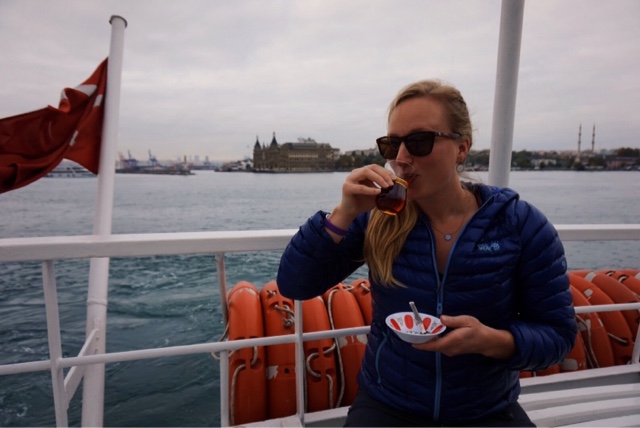 One of our last nights on the island of Santorini, Greece, I was looking at a world map and half-jokingly asked “What about Turkey next instead of another Greek island?”
I’ve had a latent desire to visit Turkey and see landmarks like the Hagia Sophia since doing a report on the country in 7th grade. More memorable than doing my report though, was the fact that it happened to coincide with a trip that my dad took me on to Washington DC that included a gawking stop at Embassy Row- a street in DC lined with high-security mansions, heavily-tinted SUVs, and an array of international flags. It was late in the evening, but we stopped to take a picture in front of the Turkish Embassy anyways. (How could that photo-op not earn an A on my report?)  While on the front steps, an electronic security system blinked to life and asked me what I was doing there. Somehow the combination of my non-threatening 7th grade dorkiness, and the Turkish Ambassador’s goodwill (boredom?) got us invited in for a private, after-hours tour of the embassy by the Ambassador himself. My interest in Turkey was ignited somewhere in the bowels of that embassy, listening to the smiling Ambassador describe his home through a thick Turkish accent. 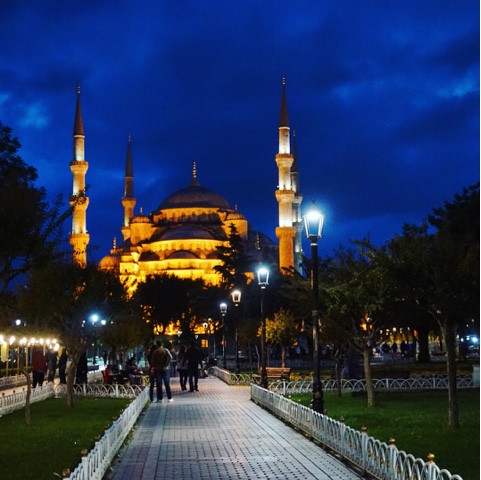 Fast-forward sixteen years later and I’m on an Aegean Air flight from Santorini desending into the metropolis of Istanbul, population 22 million. I was first struck by the dozens of “minarets” pointed skyward along the horizon. Not unlike church steeples, but more dramatic, more numerous, and topped with that exotic crescent and moon rather than a familiar cross. Turkey’s population is 99% Muslim. It was my first time in a Muslim country- albeit a very progressive, “Westernized” one. Especially in Istanbul, local women often don’t wear headscarves. The burkas and hajjibs I saw were generally worn by Muslim tourists to the area. 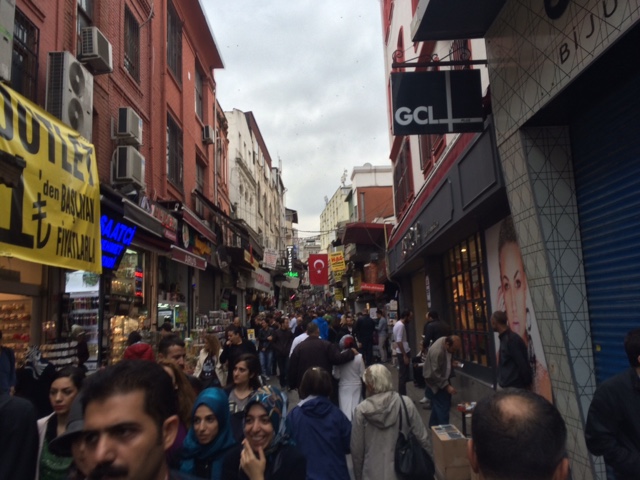 An hour after we booked the Istanbul flight, The Economist published an article along the lines of: “Will Turkey Descend Into A Bloodbath?”  I try not to let fear rule me, but I did have moments of panic and questioning about whether it was the right political time to be American tourists in a politically unstable country. We knew about the tragic bombing in Ankara last week, which killed dozens of peaceful activists, and since then there had been clashes between protesters and police in Istanbul, and even two thwarted terrorism attempts in Istanbul in the days before we arrived. Keeping a close eye on the news, and US State Department warnings, we decided to go anyways, but to “not be idiots.”  We registered with the US State Department, kept several hundred Euros on hand, and avoided large gatherings, buses, metros, and Taksim Square- where political gatherings were most likely. Long, anticlimactic story short- our experience was perfectly fine and safe. Zero issues. There was an obviously heavy, but unobtrusive police presence. The Counter-Terrorism division of police did conduct an early morning raid in our district and arrested 50 with suspected ties to ISIS- including a basement child training camp. In addition, a high-profile British journalist and PhD candidate working on women’s media access in Iraq died under very suspicious circumstances in the Istanbul airport on Saturday. We only learned about those events from following the news though- it’s not like people were on street corners chatting to tourists about them, and daily life doesn’t grind to a halt with an increased terrorism threat. Anyways, Turkey is a beautiful and multifaceted country full of friendly people, and a rich history. 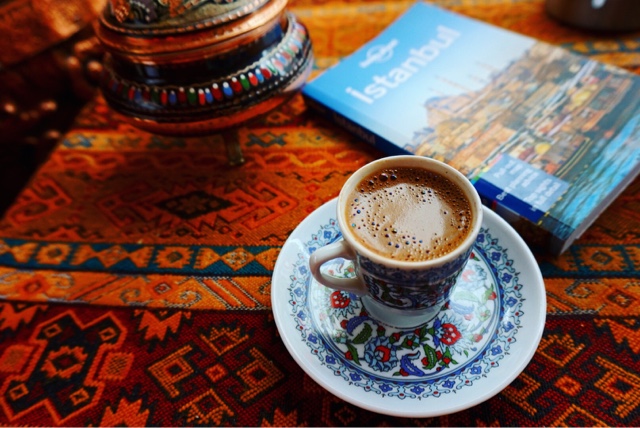 The Turkey that I experienced is best personified in the burka-clad woman pushing a stroller and chatting on her iPhone, or the businessman pausing on his walk to work to crouch down and shake his keys with a playful stray kitten. It’s the kebab chef or ice-cream maker who beam with tangible pride and genuinely hope that you enjoy what you ordered. It’s taxi drivers being dicks- like taxi drivers in every country. Turkey is the young bartender who spoke no English but still sat down happily with us to teach us smoke-blowing tricks on a hookah, or the centuries-old carved marble statues throughout a quiet, shady park. It’s the overwhelming, quiet majesty of the architectural masterpiece, the Hagia Sophia, and the graceful symmetry of the Blue Mosque. It’s ubiquitous hordes of Chinese tourists, hawking restauranteurs, and the sensory overload of the crowded Spice Market. It’s strong, muddy Turkish coffee in the morning, and sweet apple tea after dinner. Turkey is dragging Scott behind me while I haggle over silver jewelry and old calligraphied maps in the Grand Bazaar. It’s the strangely relaxing experience of a steamy Turkish Bath in a stone “hamam” built in the 6th century. It’s sticky, flaky baklava and a rainbow display of Turkish Delights. It’s the modern young Turks who are driven, educated, and, like Ataturk, the progressive reformer of the 20th century, will lead Turkey into a peaceful and prosperous future. 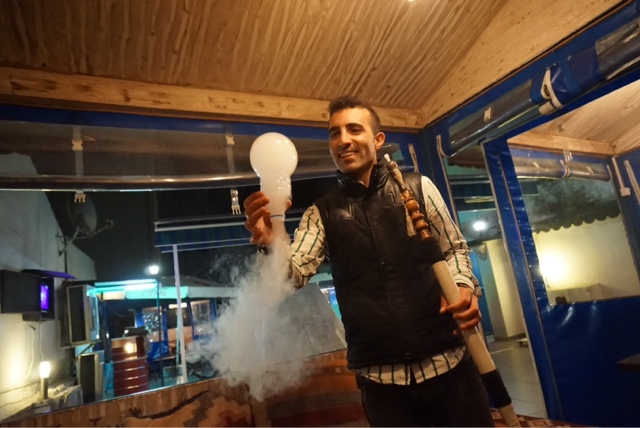 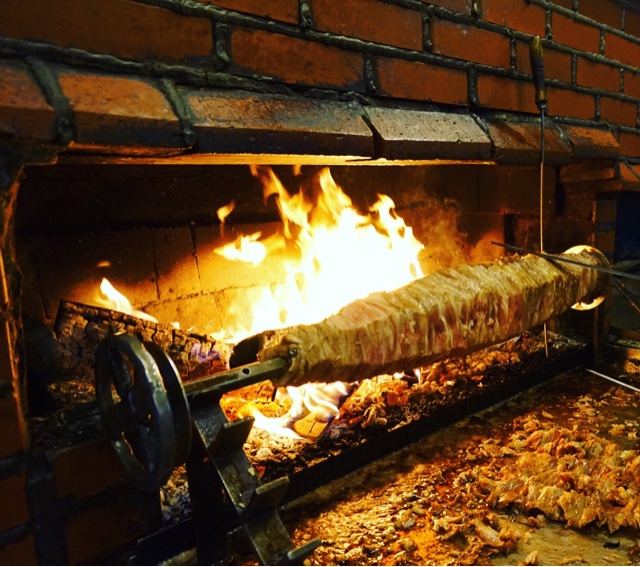 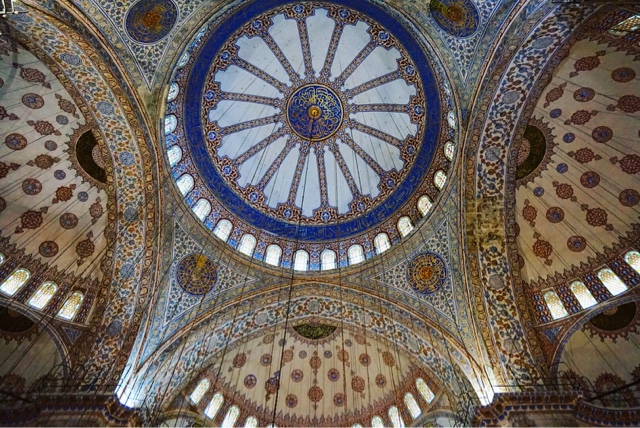 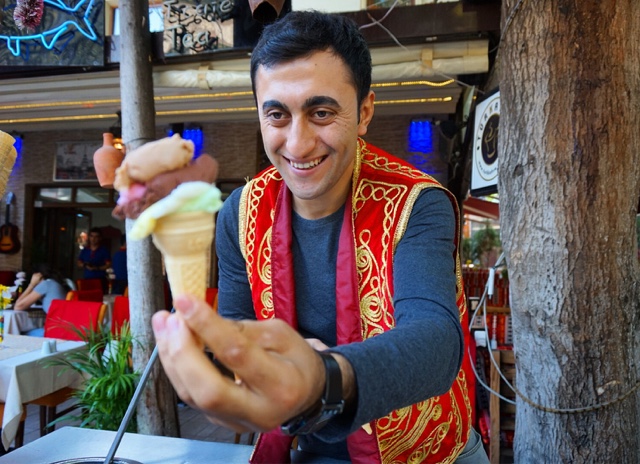 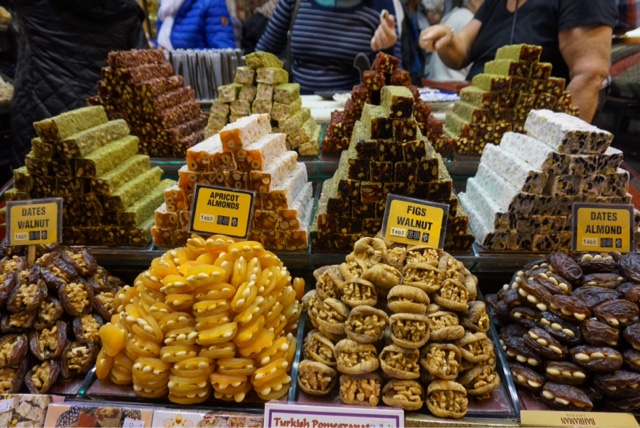 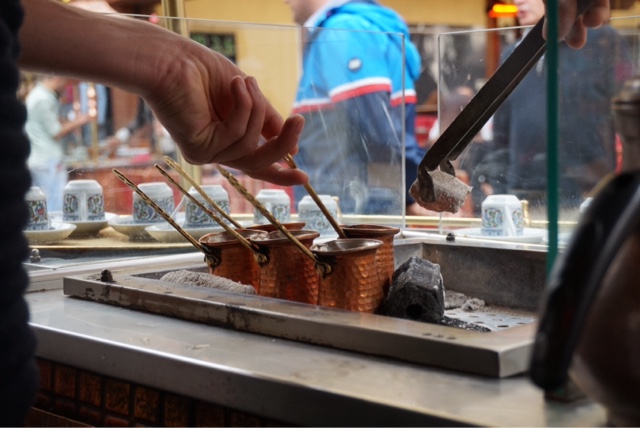 (making Turkish coffee over hot coals in a street stall.) 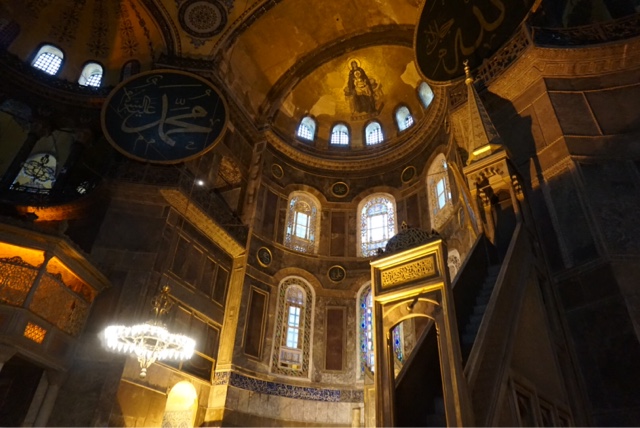 (Completely awestruck by the interior of the Hagia Sophia. Now a museum, note the Islamic calligraphy next to the iconography of the Virgin Mary that illustrate the building’s complicated past.) 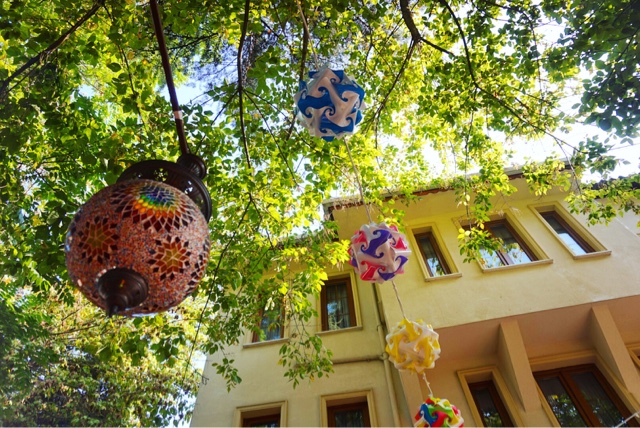 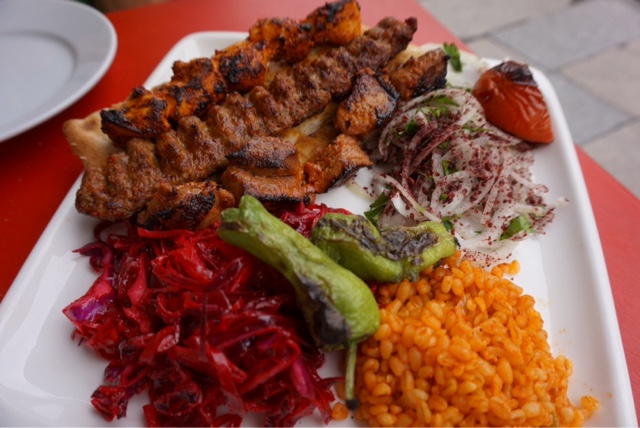 Last night we got as dressed up as the “carry-on only” rule allows and went to a performance of “whirling dervishes” a historically outlawed, mystic sect of Sufism practice. The “dervishes” performed their traditional “Mevlevi Sema Ceremony” under a stone dome built in 1470. I remember learning about this sect in high school and college, but seeing the praticioners leap out of the textbook and only the dance floor was amazing. Like so many sights, food, and people I’ve gotten to experience on this trip, I’m left speechless by the real-life experience of so many things I’ve read about. 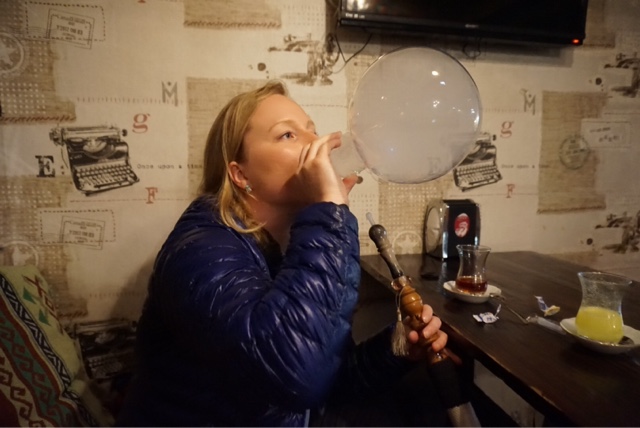 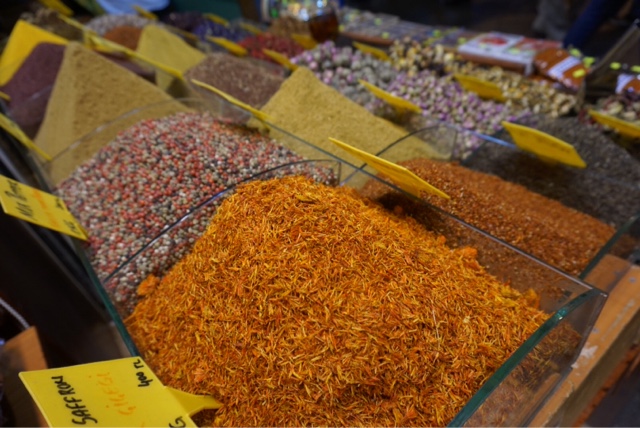 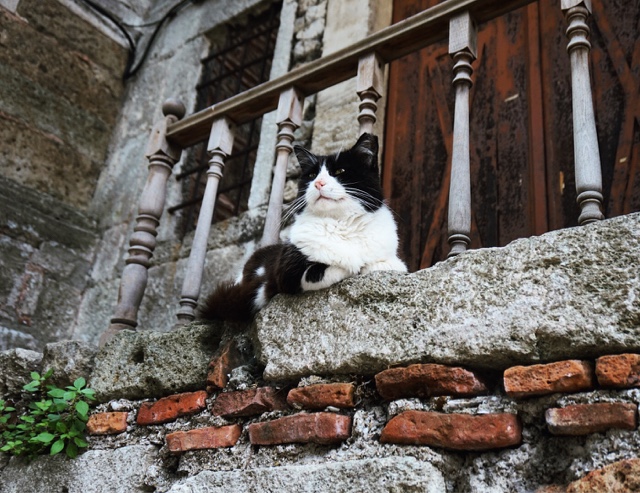 (One of many stray cats in Istanbul.) 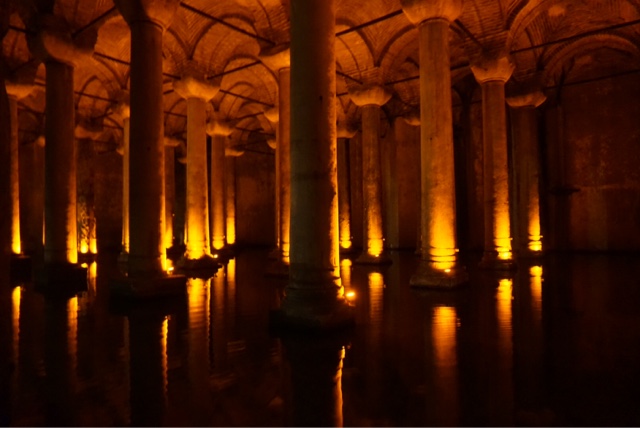 (Otherworldly Basilica Cistern underneath Istanbul. Ghost coy swim between the columns and moisture drips from the ceiling. Look familiar from James Bond?) 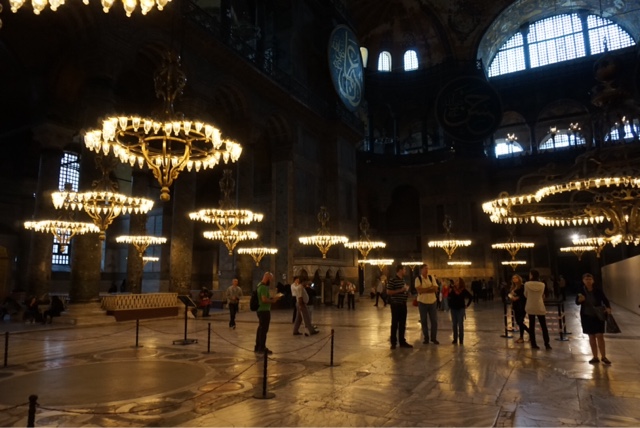 (Beautiful chandeliers hanging above tourists in the Hagia Sophia.) 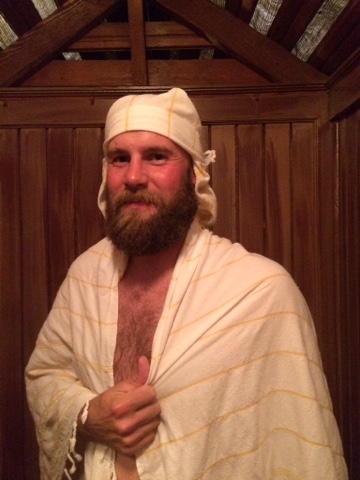 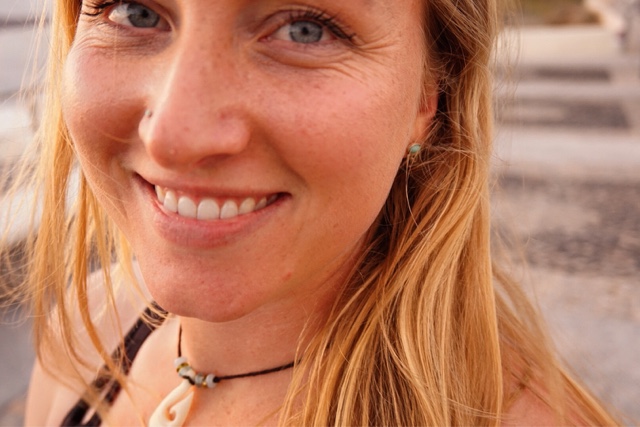 One thought on “Istanbul- Where East Meets West”