Banos: adventure capital of Ecuador (that ‘n’ has a tilde, which I can’t figure out). Anything adrenaline-inducing is available here. Whitewater kayaking & rafting, mountaineering, rock climbing, paragliding, canyoneering, off-roading… you get the idea. Naturally, spending some playtime in Banos was a big goal of mine. What I didn’t realize though, was that my time in Banos corresponded with Carnival, the biggest festival of the year, and Banos is a major destination for Ecuadorians from around the country to celebrate. 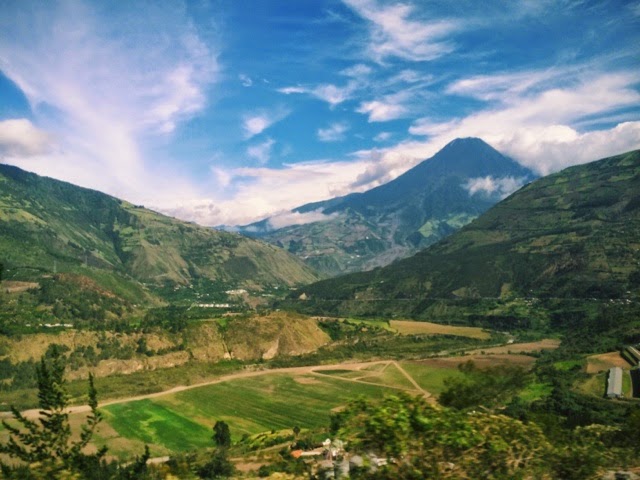 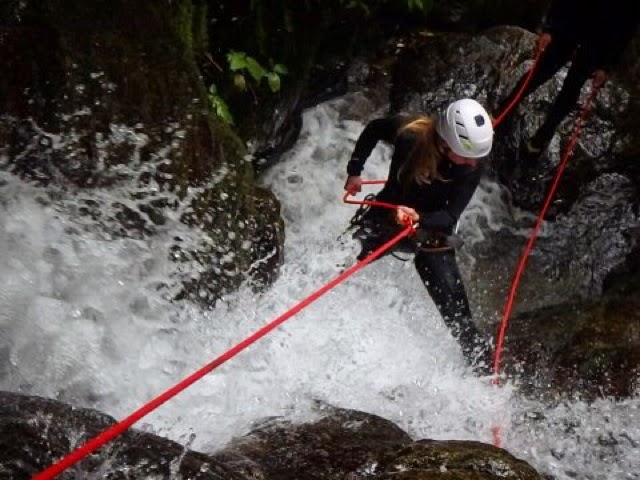 While this made getting a room difficult, the atmosphere was incredible. When I wasn’t canyoneering or zip-lining, I was with a crew of other backpackers soaking up the local festival. I mean that very literally. Ecuadorians of all ages celebrate by attacking each other with “cariocas” or spray foam. 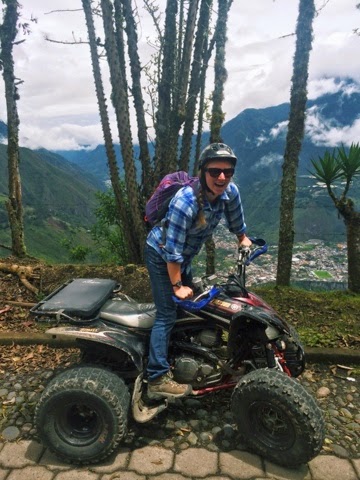 The aerosol canisters are available at every store and street vendor, and range in size from a beer bottle to a fire extinguisher. To be seen holding one unofficially means that you are “in” the game, and a target for everyone else brandishing a carioca- though especially when it comes to gringos this rule is very loose, as we’re fun targets no matter what. My Belgian friend, Val, and I initially bought our first round only “to defend ourselves” but that escalated immediately after we twisted the safety tabs off. The streets were lawless- everyone was covered in candy-scented foam. Innocent looking 4 year olds, bands of roving teenagers, indigenous women dressed in traditional clothes, other backpackers… everyone had a foam canister and laughed while attacking each other relentlessly. We ran between cars, screamed directions at each other (“WATCH YOUR BACK THERE’S MORE OF THEM THAN US!!!!“), trying to avoid the cars doing drive-bys. Eventually a group of us wiped the foam from our hair and retreated to higher ground to spray pedestrians from the safety of a bar balcony, beers in hand. Our group was Irish, British, Swiss (who, unsurprisingly, refrained from getting involved), Belgian, Ecuadorian, German, and me. Getting to decide from above who to foam taught me about the origins of power tripping. “He’s wearing Ed Hardy! Get him!  Gringos!! Hippies!! Get them! Don’t get that couple, they’re too cute. She’s got a fire extinguisher.. definitely get her!” When someone had to dash out on the street for more ammo, they came back foamed. We vaguely mused that our flank was totally undefended if someone came upstairs through the bar, but I doubted anyone had the cajones to do it. I was totally wrong though, and we fully deserved the revenge attack when a few guys invaded the bar and cornered us on the balcony. 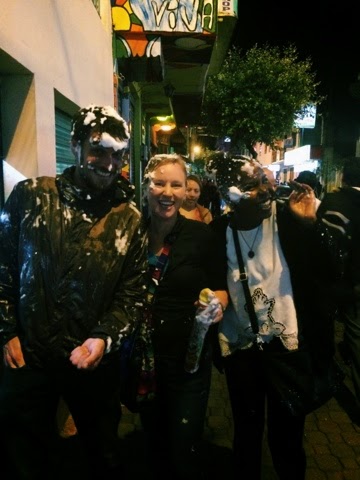 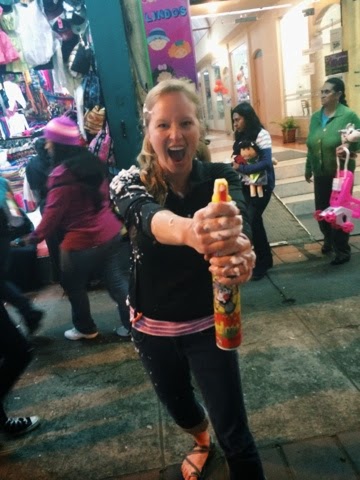 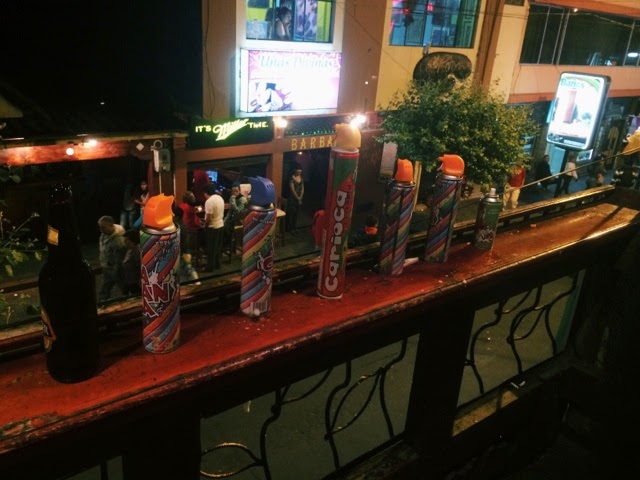 (Our arsenal from the balcony.) 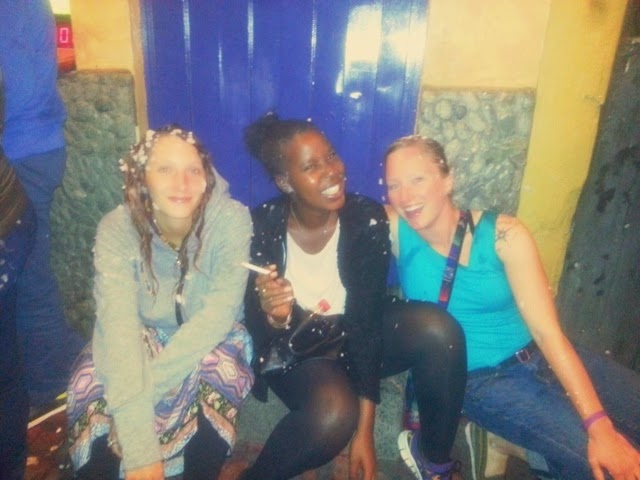 By the end of the night my clothes and hair were soaking wet, I smelled like grape candy, and my cheeks hurt from smiling. The following night we avoided the foam wars and instead drank the usual weak Ecuadorian pilseners on the fourth story hostel terrace and watched dozens of red paper lanterns float into the dark sky and eventually blend into the stars. It was the iconic, peaceful sort of travel moment that renewed my appreciation for getting to be so far away from everything I am familiar with. At one point while canyoning the day before a group of us were in a waterfall yelling “I don’t want to go home!!” The night on the roof, I admit that I was wondering if returning home was the right decision. 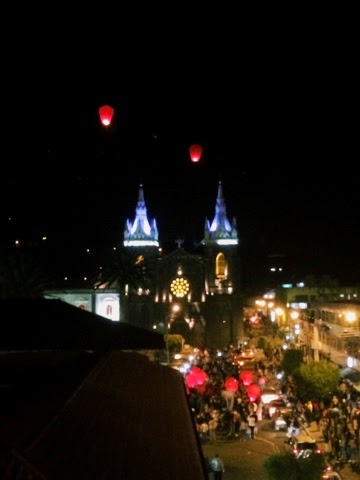 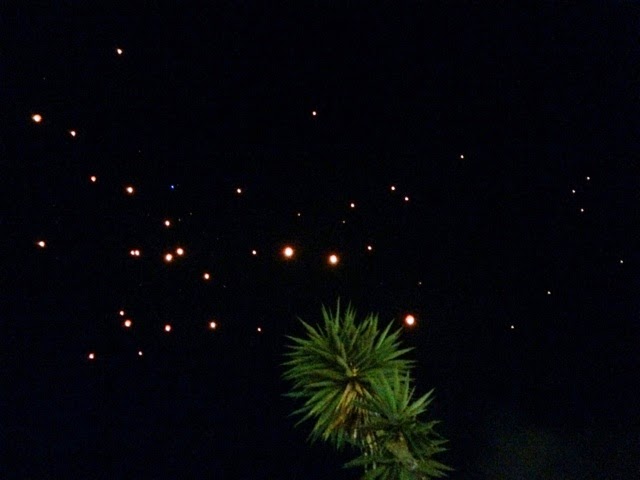 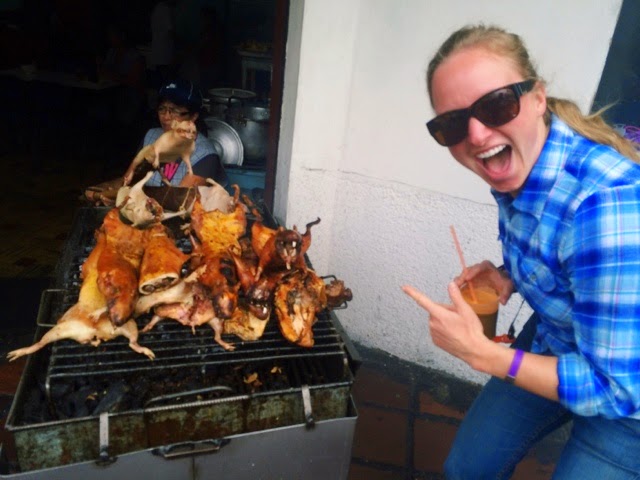 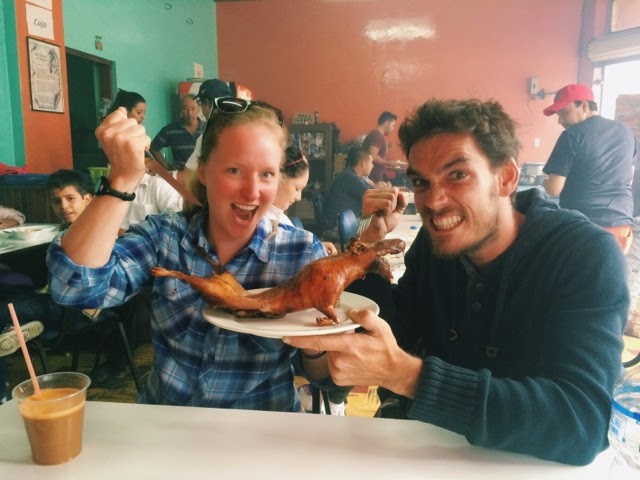 
I’m the type of traveler who struggles to move on to new destinations. I like to travel slow and get to know places and the people in them rather than bouncing around and spending a whole lot of my time dealing with travel logistics. As much wanderlust as I feel, I do like to unpack and explode my stuff all over a room and let myself get attached to some element of routine. I did manage to drag myself from Banos and up to Otavalo- a largely indigenous town in the northern highlands. Perfect for last-minute shopping, Otavalo has been a historically important city for trading, and their artisan market continues to thrive. I hit the ATM twice in one morning and filled up a burlap rice sack (that became my checked bag) with colorful alpaca blankets and textiles, stuffed llama toys, paintings and silver jewelry. 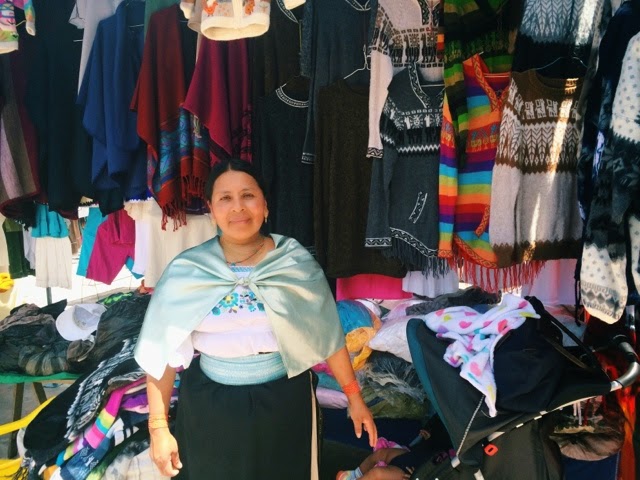 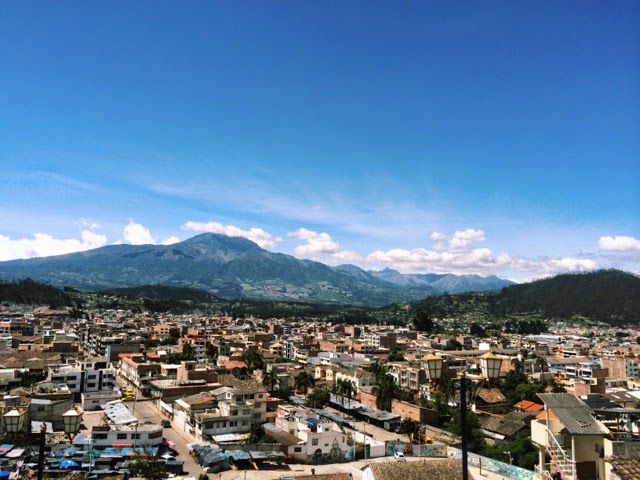 (View from a hillside looking over Otavalo.)

A few buses and taxis and planes later I’m home-home in Escondido and driving north to return to Portland temporarily tomorrow. Ecuador was amazing for so many reasons that I’ll continue to digest. Traveling solo was empowering, and considerably more enjoyable, and less scary than I was expecting. Someday I’ll make myself digest the experience more and write more on it. Right now though, I have a cold that I brought back from South America and I’m wiped out. Sorry this post isn’t very exciting or well-written. 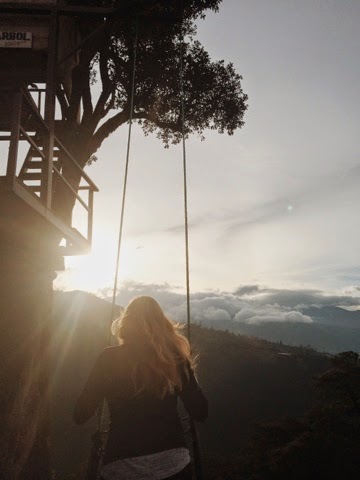 The Swing At The End of The World