Skip to content
Date: January 31, 2015Author: Colleen Sinsky
(When I said I’d be “off the grid” for two weeks, I didn’t realize I’d have weekends free to explore! Details on where I am now in the next post.)

So I finally dragged myself away from Quito towards the coast. A day and a half in Canoa, a sleepy surfing and fishing village, was wonderful, and exactly how much time I needed to remind myself that I’m less of a beach person than a mountain person. I loved swimming in the warm Pacific and watching local fishermen haul in their daily catch, roll boats back up the beach on logs, and untangle nets at sunset. 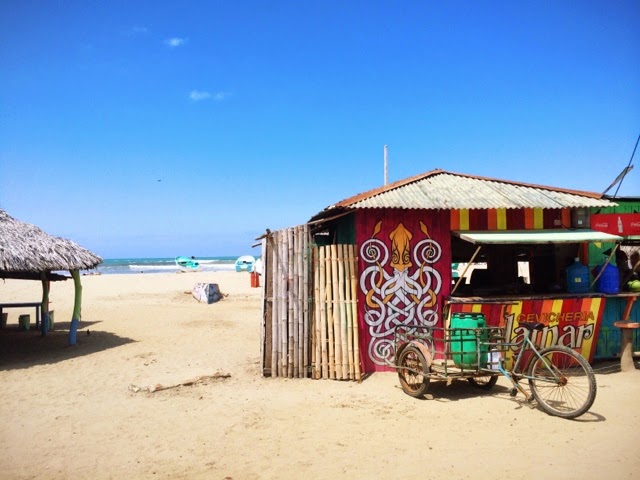 There were plenty of “cevicherias” – little bamboo shacks on the sand that sell fresh shrimp ceviche and pina coladas. At this time of year, there’s a pretty consistently good swell, and foreign and Ecuadorian surfers swamp the breaks and the few beach bars each night. I was staying in this great funky hostel that had hammocks slung all over the place, sort of topsy turvy bamboo architecture, and great papaya crepes included with the price of the room. 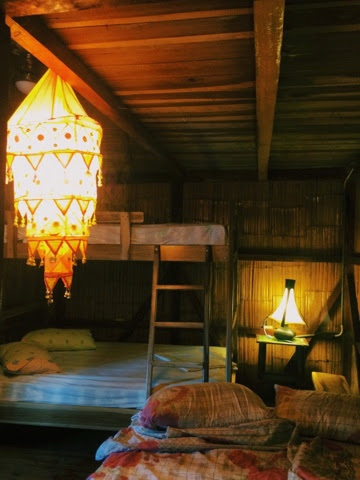 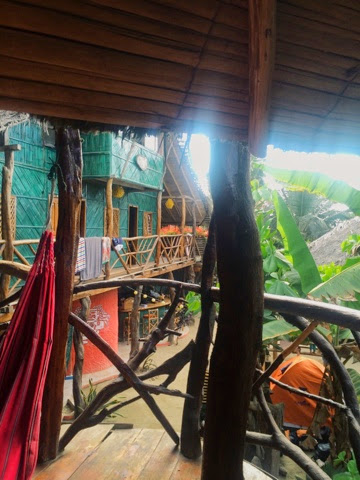 I read a lot, ate a lot of ceviche and fried plantain, and hung  out with the assortment of travelers that this type of town attracts. Over beers, we talked travel (who’s been where, where ya headed, how to get here, etc.) and learned about each other’s countries. Of course I’m consistently amazed by how far behind the US is in terms of things like maternal and paternity leave, and health care, but even more important- did you know that most Finnish houses and apartments have saunas?
I dusted the sand from my Chacos and caught a bus north to the almost imperceptible town of Tabuga, where Finca Mono Verde is. I learned of this place through a grapevine of friends and decided that I should spend some time volunteering on the farm to learn about permaculture and sustainable farming methods. Since El Salvador, I’ve always felt a bit bothered by how disconnected I am from the food I eat, but I never do anything about it. This Finca WWOOF gig offered a chance for me to get my hands dirty and spend a minute getting connected to the system of growth that sustains me. 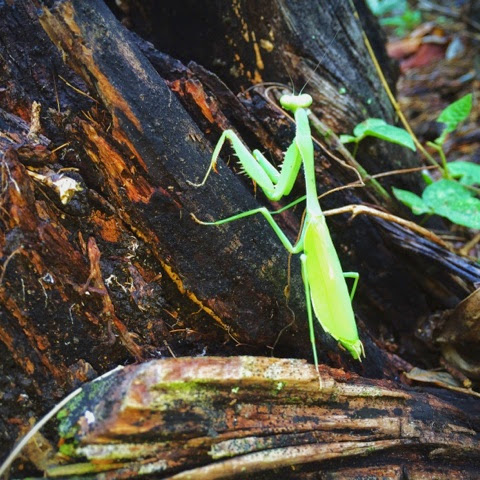 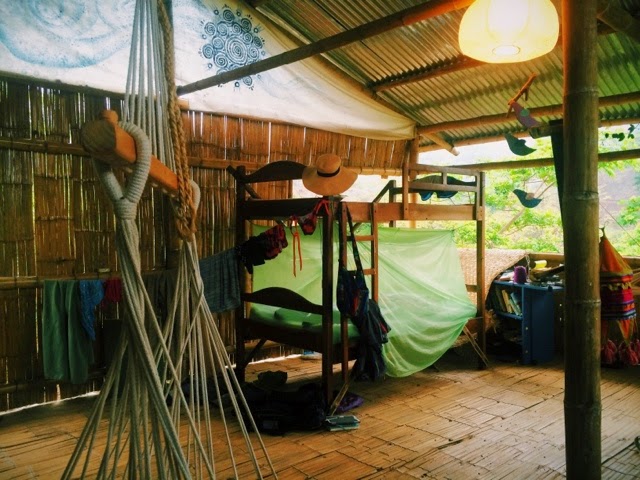 My corner of the volunteer room on the Finca. To the right is an open porch & hammock.
The Finca is great. It’s bamboo structures, chickens running around, banana trees, mud, and shirtless Frenchmen smoking cigarettes and building more bamboo structures. 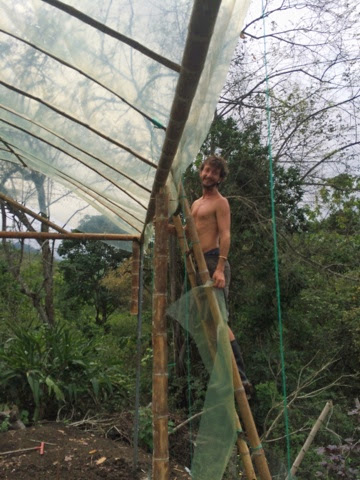 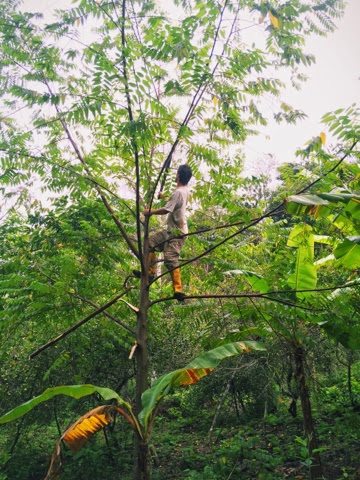 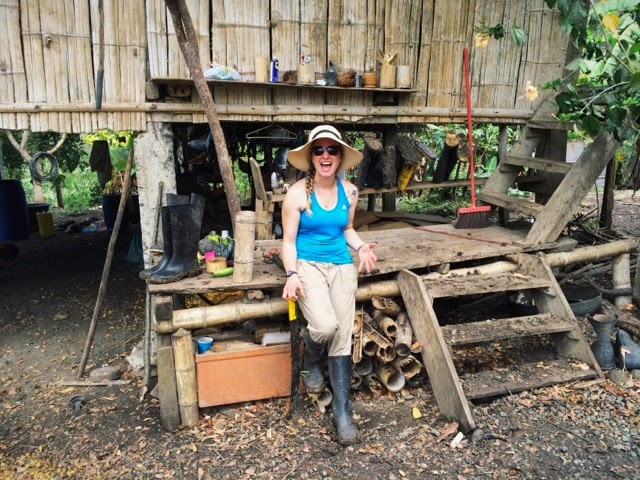 I spent several hours today pruning- which was so much cooler than it sounds. I learned what the legume trees that had to be cut down looked like, and then Arnaud, the lead Frenchman, gave me a machete for the day. I realize that when it comes to digging irrigation trenches like I did the other day, that I am a totally average shovel-user. But I am thinking of myself as a machete prodigy. I was bleeping efficient. Forehand, backhand, short volleys, and softball swings- it was as if all of my athletic experience  until now had been preparing me for this morning. I was sweaty and muddy, and my hands are threatening to blister, but looking over the field of pruned legume trees and mulched coffee bushes underneath the canopy of banana trees was a great feeling. 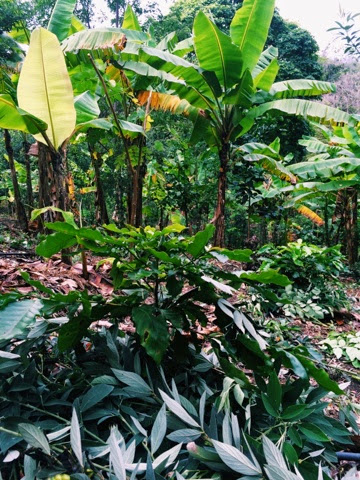 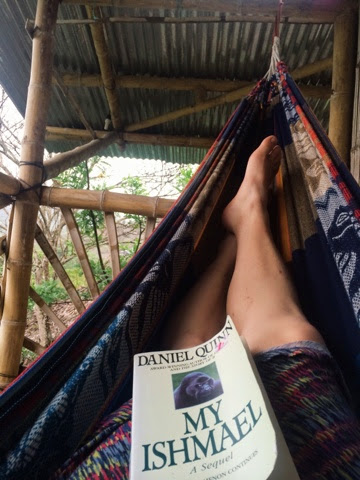 (If you’ve read this book or it’s prequel, and are as into them as I am, I want to have a book-date-lunch with you!) 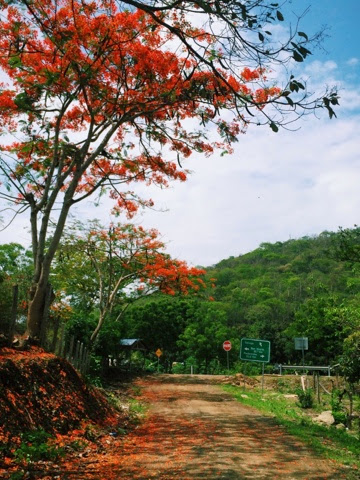 The other day, I helped a Californian couple who’d just finished volunteering to carry their surfboards and backpacks up to the main road to hitch a ride to the next town. We’d said our goodbyes and I’d just turned to walk back to the farm under orange flowered trees when a downpour hit. I was wearing this great wide-brimmed hat I’d just bought from a sombrero seller on the beach, so my head and neck were dry, but after about ten seconds, that was it. Rain in the tropics is so different than what I know in Portland. There, the rain is cold and unfriendly and dark. There’s rarely enough to even merit using a hood, but it’s a constant, depressing companion for months straight. The rain in Ecuador was a completely different type. The air turned into a waterfall, and the dirt road I was walking on became a series of muddy rivulets within minutes. I ducked into an old cross section of a giant cement pipe and leaned back against the cool wall to watch the torrent outside. It was warm out, and I was already as soaked as I could possibly be, so the rain wasn’t actually obnoxious, but the pipe was cozy, and a good place to sit and think. Outside, chickens were roosting close together on the bamboo pillars underneath a house, and a group of muddy calves trudged across a field together. I tried to picture exactly where I was on a map; zooming out from this farm, to the coastal providence, to Ecuador, to Central and South America, to this hemisphere, and to the whole planet and beyond. I saw all of the places where the people I miss are, and sat upright when I realized that I didn’t really know anyone within 3,000 miles. That is just too lonely a thought when you’re sitting out the rain alone in a concrete pipe, so I smiled at the downpour and waked back to the Finca. Ten minutes later I was laughing, making lemon jam with two French guys in their skivvies, drinking cowboy coffee, and listening to bad techno music over the roar of the downpour on the tin roof. 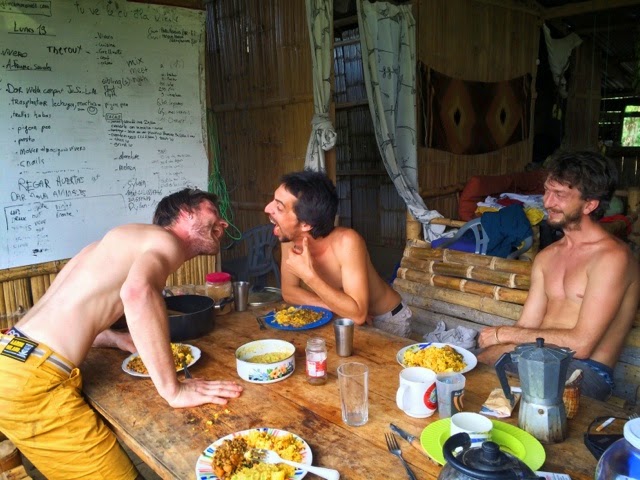