Skip to content
Date: January 23, 2015Author: Colleen Sinsky 0 Comments
Deciding to go to Ecuador was one of the more impulsive things I’ve done. I only bought* the ticket on Friday and haven’t even spent much time thinking about the trip between then and now. I did buy the Lonely Planet guide and a Spanish-English dictionary, so what could go wrong?

What a weird place in my life when I literally clicked around Google Maps to decide which random country to spend several weeks in! Ecuador won because it had been part of my original Patagonia plan, and through doing preliminary research and talking with friends, it sounds like a relatively safe place to be a solo female backpacker. A big goal of mine is to improve my Spanish, and it sounds like Ecuador is a good place to do that, as well as offering a diversity of outdoor fun. I’ll spend a day in Quito getting acclimatized (literally- Quito is the world’s highest capital city at 9,350 ft), and then bus to Mindo to check out a cloud forest, and then to spend a few weeks volunteering on a permaculture farm on the coast (thanks Chris for that connection!). I’m not quite sure what the next four weeks will look like. I’ve learned that it’s so much more fun to go with an open agenda and the ability to say yes to opportunities, and to let my mood and whomever I meet sway me towards what I decide to do.

And yup- only traveling with a small carry-on bag. This rugged cutie, actually, from the MH employee store, and an REI flash pack as my “personal item.” As a chronic over-packer/doomsday prepper, it was a struggle for me to cut down on what I packed. I’ll figure out a way to post my packing list, (which I’m sure will be the most fascinating thing you’ve ever spent time reading). I hate the feeling of BSA (“Backpack Separation Anxiety”) and with the high rate of bag thefts, pickpockets and robberies, it’ll be one less thing to worry about if I can just keep my backpack on my lap while taking buses around. Actually only having a carry-on was already hugely helpful today.. funny story… 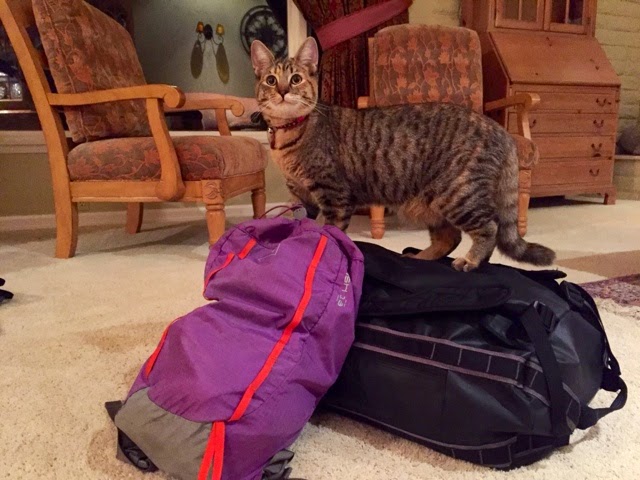 My big travel adventure became more adventurous earlier than expected this morning, when I was supposed to have left. My flight out of San Diego had taxied down the tarmac and was gathering speed on the runway, seconds from being airborne when we suddenly stopped. The pilot announced that there were bad winds in the connection city and that we would head back to the terminal to deplane and wait on news. Because I missed my connections they offered me a circuitous route that would have taken way too long and involved spending tonight in Mexico City airport. I opted to just try again tomorrow morning with a more direct route. 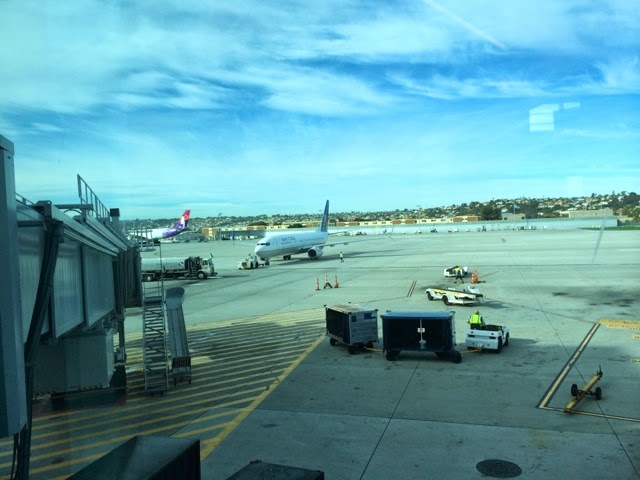 (Here’s what should have been my flight, taking off without me.)
So glad that I didn’t have any checked bags and I could just hop off the plane and be flexible with my plans. My family welcomed my triumphant return from the airport a few hours later, and got Emily to play hooky from high school so we could hang out.

So I’m trying again tomorrow and in the meantime packing a few small things I forgot and reading up on these these terrifying reports of robberies in Quito. I might just stay in my hotel room the whole time. Only sort of kidding.
I also went to Zion National Park, via Vegas, for a few days with a friend. Zion is rad. The drive was pretty, the weather was chilly but otherwise perfect. I was glad to have a zero degree bag, and it was nice being in the park during the quiet season. 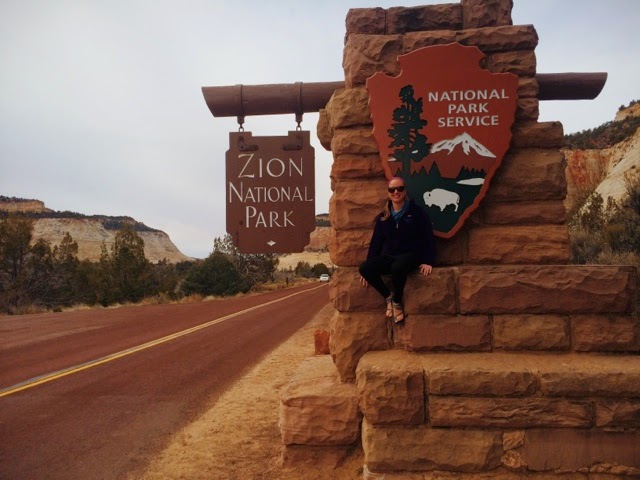 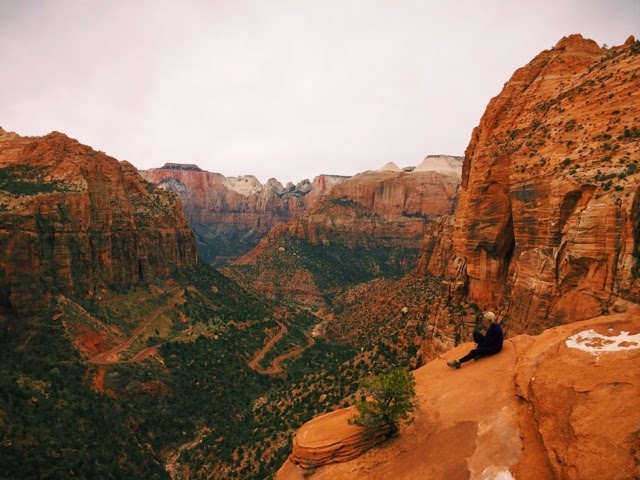 Hiking solo in a canyon on Sunday I met Dianna, who described our meeting as “hiking into a parallel universe and met another version of myself.” Haha, it was incredible- almost creepy- how much we had in common! I love experiences of paths serendipitously crossing and I’m excited to connect again in Portland! (Yeah Dianna.. make the move!) 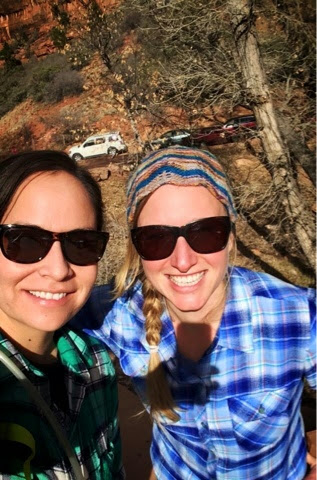 On the way back, we stopped in Valley of Fire State Park in Nevada and happened to hit it right at sunset, when it was very apparent how the place had gotten it’s name. It was fun to scramble up this massive, somewhat sketchy red rock pile and be rewarded with stunning 360 degree views of a mountainous desert glowing in the fading light. 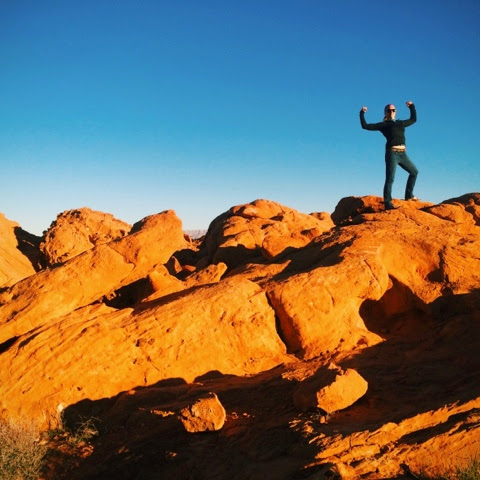 *”Bought” this ticket for a total of $150 round trip in fees and taxes. I got into “travel hacking” a few months ago and it’s pretty awesome. If you can deal with a few points possibly dinging your credit score**, some annual fees, minimum spend requirements, and having to be pretty organized, strategically opening credit cards is a fantastic way to get cheap airfare. I’ve only opened four cards and have enough miles to go around the world and back easily. I’m a relatively low “spender” but you can get creative in hitting spend limits (ie: Amazon money transfer, putting your phone bill and utilities on it, buying gift cards, etc.) Just be sure to pay it off in full each month obviously, as the APR is generally rough. Choose one of the three travel alliances to target your miles because the airlines will transfer miles within each alliance. I go with “Star Alliance” which includes United Airlines.

So, for example: Each way to Ecuador was 20k miles (this means taking a more roundabout route and not being totally flexible on days, but who cares)
A few months ago I signed up for Chase United Mileage Plus Explorer card, which is a good one. The sign up bonus was 30k miles (don’t get a card offering any less than this), and I got an additional 5k miles for adding my brother as a co-signer. (Helps build his credit and I just cut up the card anyways.) I had to spend I think $3,000 within a year, which I did, and then some. There will be a $95 annual fee the second year, which I could probably get waived if I say pretty please. So, woohoo! that was enough miles for this 40k mile Ecuador trip. Bonus of then booking with this same card was priority boarding, free checked bags, and free passes to United’s VIP lounge. There isn’t a catch, as far as I know. Really, I should say that this trip costs $245 (fees/taxes + credit card annual fee) plus the time it took to research and organize this, but that is far better than the $1,300 price tag it would have had otherwise.
Here’s a good beginner guide for travel hacking.
And I haven’t used personally used this guy’s advice, but he’s well respected.
Spend some time wandering the internet and you’ll find lots of info. Just be sure to pay off your balances and keep track of cards.

**Opening up these cards actually helped my credit score (access to larger line of credit, more lines of credit), but closing the cards can ding you.