Skip to content
Date: January 11, 2015Author: Colleen Sinsky 0 Comments
So I’m definitely not going to win any Blogger of the Year awards.  I haven’t written anything a few months, and those have been eventful months!  It’s been shocking to me to hear from a number of people that they miss reading my posts (weird! and thanks!) and I saw that the view count on this thing is surprisingly high.  So, my dear friends and family, I’ll choose a few recent things to digest here. 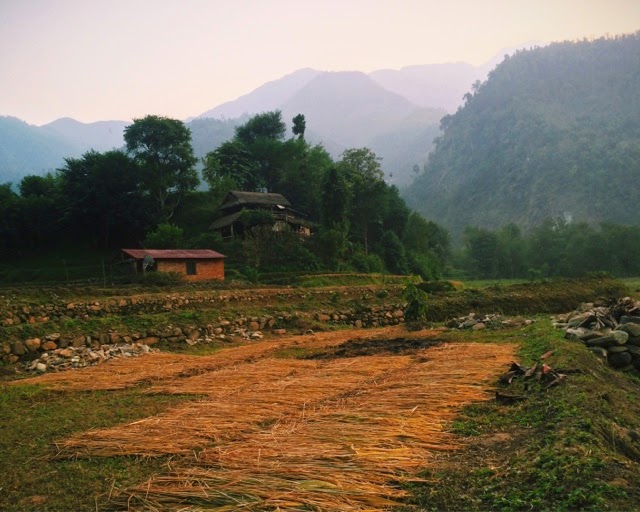 (This was the view I opened the door to in the morning. It’s harvest season!)
1. Here’s a funny Nepal bus moment.  I had discovered that I could thumb-type on my iPad mini despite how jarring the bus ride was, so I was enjoying my newfound bus-riding confidence, listening to bluegrass remakes of Modest Mouse, and journaling eloquently about the bus…
‘Trundling confidently along in our swaying steel behemoth, we dodge devastating potholes and muscle smaller vehicles out of the way.  The front driver’s cabin is bedazzled in sparkling red garlands, marigolds, postcards of Himalayas, swinging holographic holy cards of various Hindu deities.  Despite the bus being lovingly painted with colorful calligraphy invoking Laxmi Puja and the flying monkey god Hanuman, I don’t feel the security they’re probably supposed to inspire.’
…when I was suddenly jolted from my writing by a screech, and swerve, a metallic thud, and our bus gently coming to a stop blocking most of the country’s largest highway.  We all got off to take a look at what had happened.  I may not know much about the mechanics of vehicles but even I could tell that the whole drive shaft had just fallen off and gotten jammed in the underbody.  I sh*t you not. (My dad says I shouldn’t curse on this blog.) That bus wasn’t going anywhere.  The Nepalis- more used to this than I was- took only a few hectic minutes to help unload everyone’s luggage and flag down passing buses, who scooped us up and took us the next few hours free of charge. 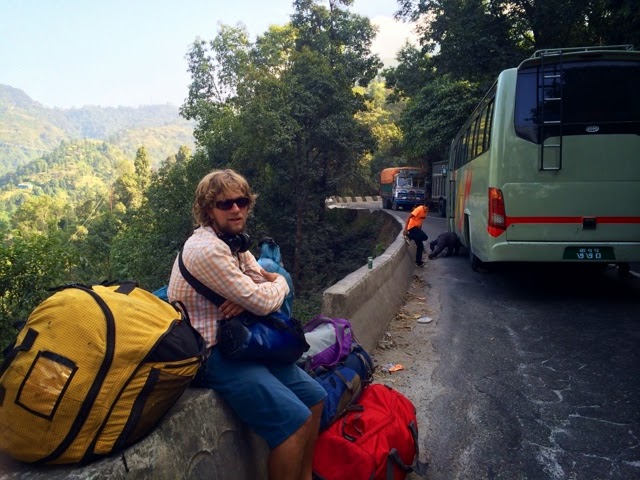 The new bus was full of a loud, sing-songey Chinese tour group who blasted Chinese pop music and traded what must have been joking insults over the bus PA system. (I should mention that nearly half of tourists to Nepal are Chinese. The number of Chinese visitors increases every year, and Nepal is frantically trying to keep up with the growing demand from their rich northern neighbors for a cheap vacation.)

2. The Return from Nepal was more eventful than I’d have liked, but it all worked out.  My kidney infection got better soon after my blog post months ago, I read this great book Shantaram (which you should read too), we went whitewater rafting/kayaking on the Trisuli River, and I said goodbye to Vince in Kathmandu.  I’d changed my ticket to return home a week earlier than planned to surprise my mom for Thanksgiving, but when I went to the airline office in Kathmandu to confirm, I was informed that they were closing all airports in Nepal for the next week due to security for a political conference. No joke. Other effects of the SAARC conference were road repaving projects, massive traffic, and a very visible military presence everywhere in Kathmandu.  Can you imagine that happening in the US?  The airline wanted $300 cash, in the next 20 minutes, so that I could fly out the next morning.  My debit card had been stolen (see last post) so Max ran to an ATM, and I went gratefully in debt to him and got my flight. 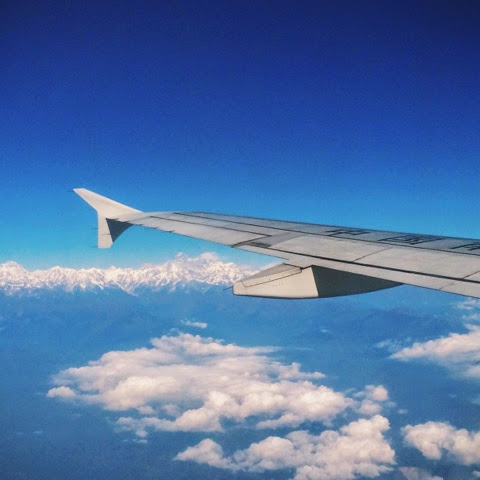 Mount Everest from the ascent out of Nepal!
3. Nepal was fantastic.  If you are considering going, do it.  Each year more rivers get dammed by India and China and the Himalayas become a little less pristine with each added tourist and teahouse.  Go with an open heart and don’t hide behind a camera and Nepal will reward you with incredible warmness, adventure and culture. I’m not really blogging specific helpful travel details, but get in touch with me if you want to hear those. 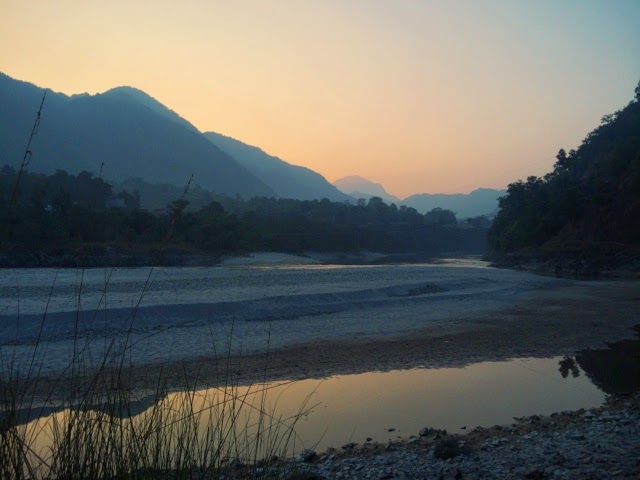 View from the river camp after rafting. 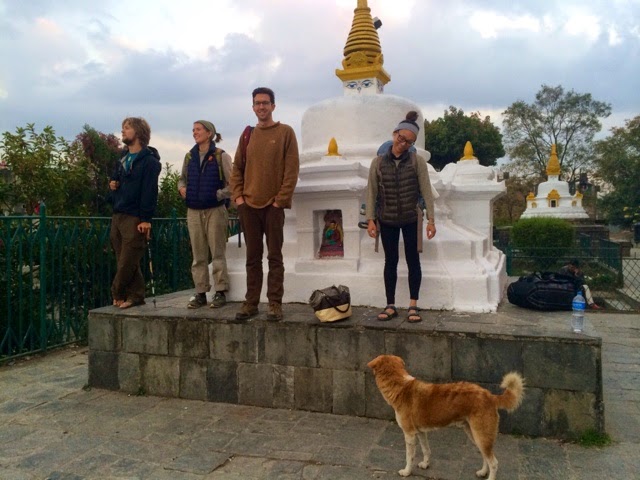 Watching our last sunset in Nepal fade over the Himalayas. 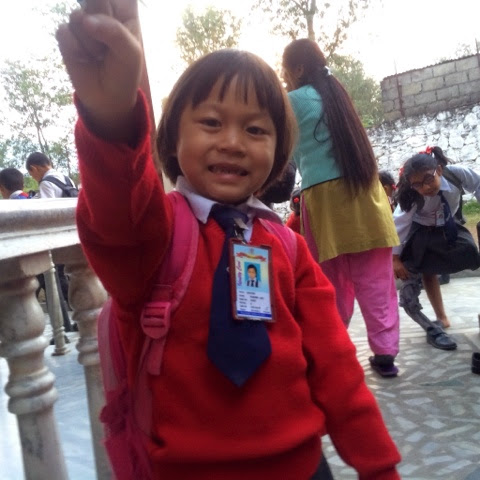 (One of my favorites at the orphanage in Pokhara.)
4. The US is pretty fantastic too.  Coming home has been wonderful. Being so near the deadly storm on Annapurna  and hearing the heartbreaking stories told to us by grieving Sherpas made me reevaluate some of my priorities. Surprising my mom and sister and seeing my family and the dogs was just the best. 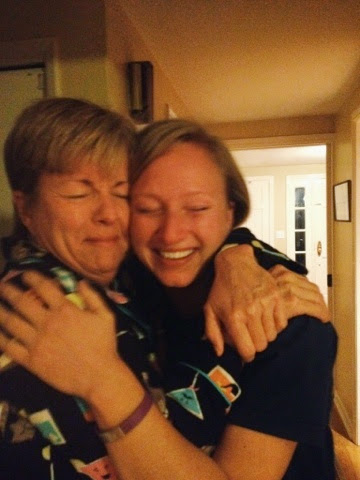 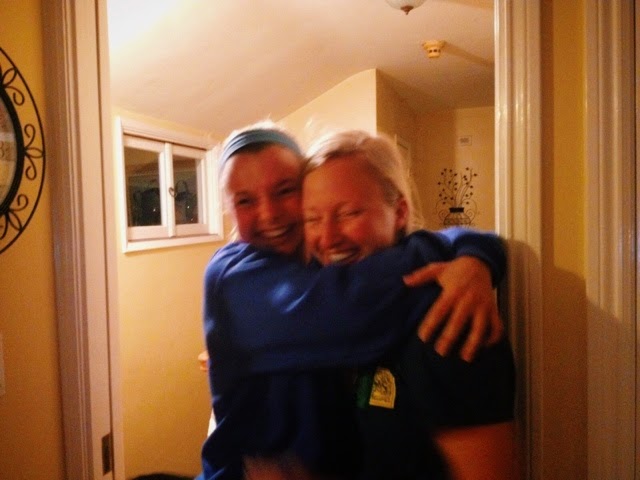 After Thanksgiving, chasing Max to Idaho for a week was fun. Seeing my Uncle John & Aunt Abbie in Boise was lovely as usual, and getting to explore a state I’d previously known little about was a great adventure. 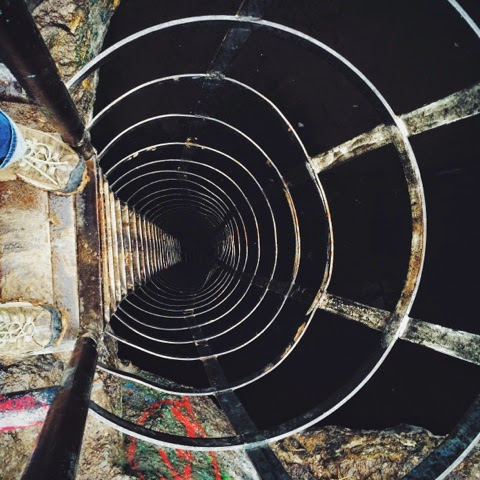 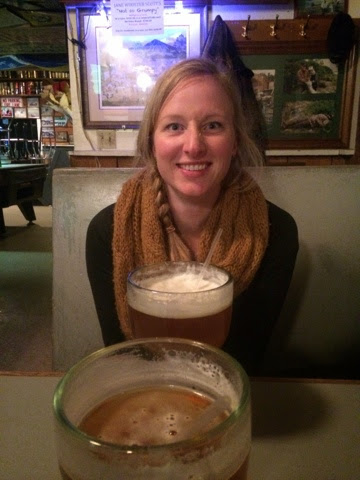 (This beer was so heavy I needed a straw.)

Portland never felt more like home than when I felt my usual rush of relief when I stepped off the plane and walked down the familiar terminal with its ugly carpet. I love that city. The week was full of friend dates and beery gatherings and JOIN visits- all of which reminded me of how much love I left behind. 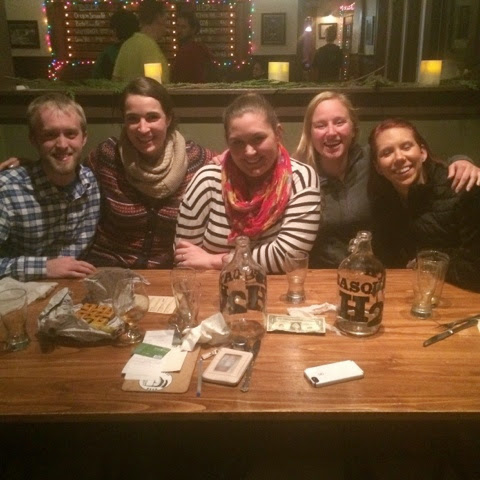 Mini-reunion of my JVC housemates. I love these people. 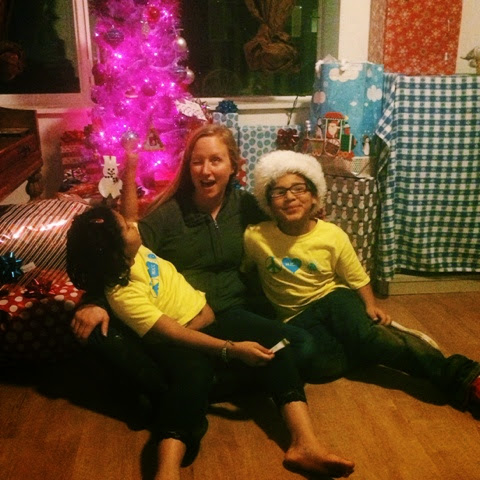 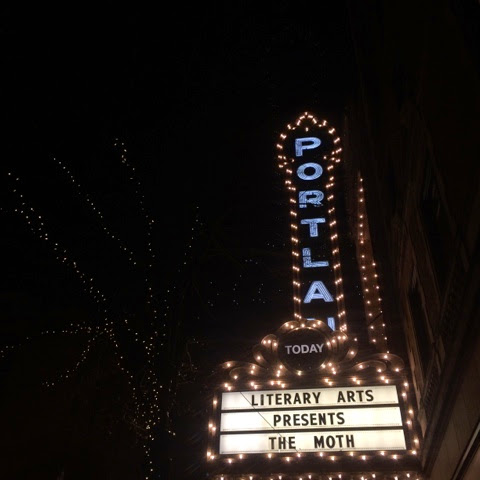 It’s tough to just take a quick vacation to a place where I have such deep roots, but important, I suppose, to get to realize how much it all can mean. 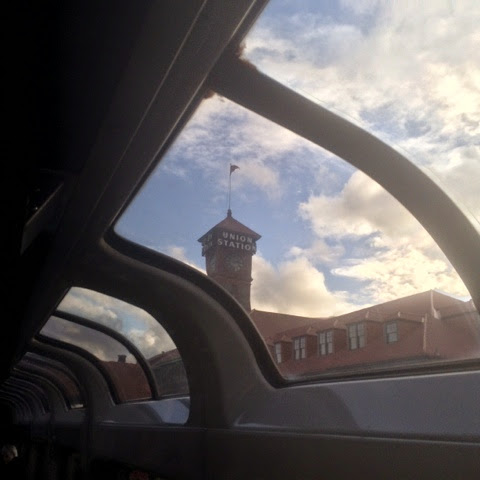 The 33- hour train ride from Portland to San Diego gave me a lot of time to think and watch the scenery roll by. I had a wonderful Christmas at home in Escondido with my family. Afterwards we went to Sedona, AZ so we could all commiserate in a condo-cesspool of flu-germs and be too sick to do anything outside. I actually survived without getting sick, thanks probably to my post-Nepal hyperactive immune system. 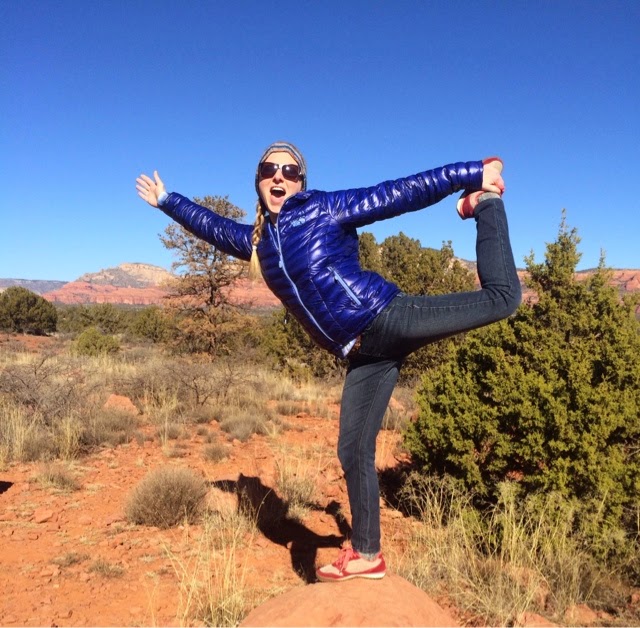 (Being a jerk and showing off how flu-free I am!) 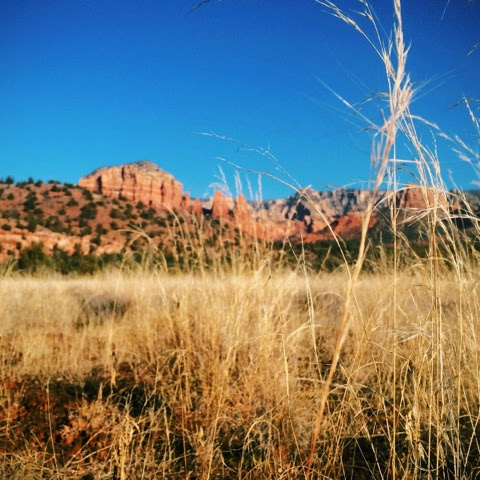 I spent New Years Eve with one of my best friends, Sam (aka Dr. Melzer!) in beautiful snowy Flagstaff, and then spent a fun night catching up with Francesca and friends at her beach house near Huntington Beach. 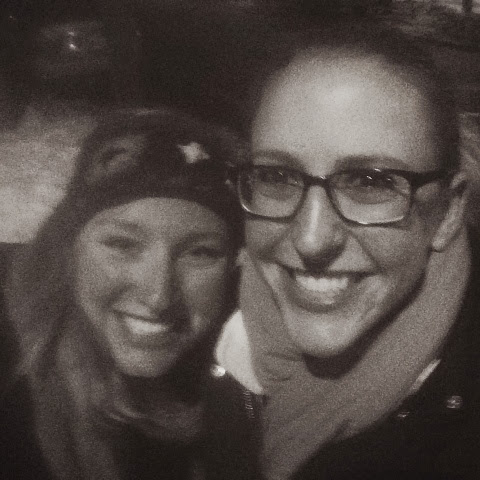 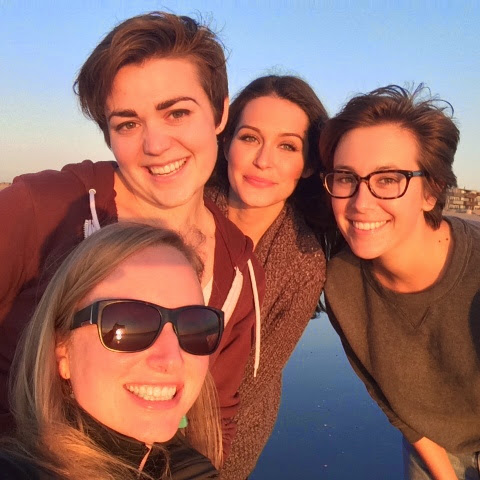 Life is not bad at all. I donated all of the money from my GoFundMe to two great organizations doing more important work than I could ever do in Nepal (see last post). I feel a lot of guilt lifted after having donated the money to do more good than I could ever accomplish in a short time.

5. Here’s a more intimate excerpt from my travel journal:
“One dumb idea that I held until recently was the impression that people doing the long-term type of traveling must really have their stuff together. It was probably because of the romantic, photogenic, carefree image that comes with traveling that made me subconsciously believe that I’d transform into a confident, wise, globetrotter who could draw an accurate map of Asia from memory and fearlessly hop on the back of a motorbike to try to find my way home after dark in Kathmandu.  I can do both, but not at all accurately or fearlessly.
I think that a large part of pushing myself out of my comfort zone and into a foreign world is being able to embrace the fact that I’m still going to be the same cautious Colleen who was the last to learn to bike without training wheels, and is pretty terrified of being broke or getting my heart broken.  I’m still going to be full of self-doubt and fear around the big questions and will never be totally at ease traveling solo.  I’ll continue to be very aware of the disconnect between the curated Facebook version of events and the long, unglamorous hours in between the photo ops spent in lonely hotel rooms meditating on whether I’m making the right decisions and what I want to be when I grow up.
But in leaving my wonderful Portland world I forced myself to say “Yes!” to the universe and to go ahead and let myself make some mistakes and maybe get hurt out in the world.  I definitely don’t ‘have my stuff together’ but I’m giving myself-insecurities and all- permission to be vulnerable and to live the questions out here.” 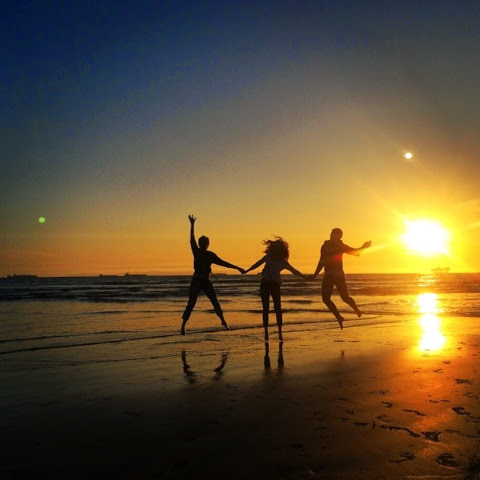 Since writing this, Max and I ended things, which is sad, painful and not for blogging. My life plans have been shifting constantly, but I think I’ve tentatively figured out what I want to do from here. It includes South America, humanitarian aid on the US-Mexico border, wilderness therapy and grad school. Because of my knees, I had to back out of the Patagonia volunteer program which is a huge bummer. My time at home has included doctor visits, x-rays and physical therapy. I’m optimistic, but unfortunately the coordinators in Patagonia agreed that this is not the year for me.
Details on future plans in the next post.. which I’ll try to write before three months of adventures go by..